A downloadable game for Windows, macOS, and Linux

A very simple character buider prototype. I wanted to learn to create customizable characters for a larger game and came up with this very basic builder. For now, it's more or less a paper doll game with a male and female sprite. Let me know if you have any thoughts as to what might make it better/more interesting.

Hi. :) I’m a semi-casual complainer, as well as a role player who would actually use this piece of software. I might be blunt with some of my remarks. If today wasn’t a good day for you maybe reschedule reading my thoughts to another day.

As for the store page:

I hope some of this will help your game as well. :)

OMG, you are awesome! I appreciate all of your comments. <3

The character won't be lost in the actual game. (The reason for using the build I did is that it should be easy to carry it onto whatever game I eventually import it into as it's saved as a layered image. I could probably create an export feature in this game, but as it's designed as a precursor to other things I haven't put in the work for yet.)

I've been fiddling around about a bit with the idea of including a color scheme for clothes/skin/eyes. Since it's a base layer, I think I could manage it. (And it would give a lot of options.) I also love the randomize idea!

I'm not sure what I can do in this game with wrinkles/chin/other facial stuff/ more outfits (since I am completely incapable of drawing), but I will see whether maybe I can find an artist for future games who's willing to play with layers. Regardless, I really love the input! (And what I should ask for if I ever do end up partnering with an artist.)

And yes, the screen is pretty primitive. I mostly am just screwing around with the prefix to a (hopefully) good game. But I very, very much love your detailed commentary. You are a deeply kind (if semi-casual complainer) .<3

Glad you took my feedback well. :) It helped that you did a good job to work off from. Although now that I look back on it, I sure could have done a better job with explaining my train of thought sometimes - or formatting.

I did not get the impression that the character would be lost in the actual game - nor would I have wanted to imply such an oversight. Sorry if I made it sound that way. Also: Just saving a character through the Ren’Py base functionality worked fine for me as an end user of the 1.0 build.

On that note… There’s a basic feature idea that came to me about 10 minutes after I went away from the keyboard and it should be well within the basic capabilities of Ren’Py: Have an field on the base menu where the user can enter a name (“Face, Clothes, Name, Done”). Said name could then be constantly displayed either under the character or to the right of them - where there’s a lot of unused space. That way, it would be easier to find previously saved characters when browsing through the save game preview images - in case the user forgot what they looked like. (Again: This is something that (TTRPG-)Storytellers probably would appreciate.)

The incapable of drawing part is kind of a bummer though. Maybe you could persuade an artist to draw at least some basic age lines for you to transpose on the character. It’s one of those cases where it takes a talented artist longer to write the email than to draw the actual lines. Sorry to be so persistent about the character age, but I at least feel old since I was 19 and in a world where only teens and tweens seem to have the adventures I’d like the representation. ;)

Oh, always! I posted this (even though it's very simple) with the hopes that it would get some feedback that I could use to improve upon it for the later game. :) (And such thorough feedback is very much appreciated!)

As far as a basic paper doll maker goes, I could probably also create an export function (pdf or gif or something), which might be interesting as well.

I was planning on having a name entry field in the game, but like the idea of displaying it on the screen while building the character.  Good idea. :)

And maybe I can figure out age lines at least. (Or hunt down an artist or reach out to the one who created the sprite to begin with.) I agree that it's nice having a few choices as far as faces/ages/etc. go. (It's just always a bit challenging since my skills are very much not in the art department.) And it's also something that might be able to be implemented in a final game. (In large part, this was just an attempt to learn more about how to use the layers function within Ren'Py and see if I could implement something that works. It's easier than I'd thought it would be, so I could see doing something fancier as I fiddle around with it a bit more.

An export function would be a cool feature. I had been thinking about that aspect mainly from an (possibly old-fashioned by now) role player’s perspective where you’re happy if you have any graphical representation of your character at all. When I use a photograph from the internet, I’m not going to photoshop a bowtie in. If one of my fellow players is kind enough to provide a pencil sketch of my character, I’m not going to ask them to “update” it. … Where was I going with this…? Ah yes: While .gif should do nicely and .png should be future prove, users could already press “S” and get their “screenshot0001.png” though Ren’Py. ;)

If you wanted to improve on that…

Oh and I disagree with your skills not being in the art department. Even if you can’t draw, making a dog dating game just has to be art. ;)

It's hard to go wrong with dog dating games. :)

And I'll play around a bit with a .gif export. I don't think it should be too hard (since it's something that exists within Python from what I can recall), although sometimes the simplest seeming things get difficult. Similar with the printer friendly and all. It seems like it *should* be easy, but I've been fooled before. :)

Oh well. Off to tinker next weekend with character builders. :) Thank you yet again for all of your comments!

Cute toy! It's a start! What am I saying, there are more options than I expected at this stage. Not sure what specific additions to ask for.

Thanks! It was a weekend project, so I'm still fiddling a bit with it. (All the more so as I'm not sure whether this is even the layered character I'd keep long term.) But thoughts are always welcome as hopefully it means that whatever I end up with long term will be all the better! 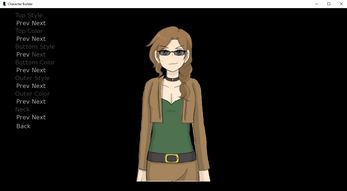